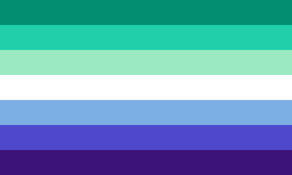 The History of the Vincian (aka Toothpaste) Flag, and Why Lesbians (generally) Dislike It

It's pretty easy from the get-go to see why there might be some conflict between the lesbian and vincian communities in regards to this flag; it looks very, strikingly similar to the lesbian flag. Some see this as a positive; others find it downright disrespectful.

A good place to start regarding the breakdown of this flag, and why there is so much controversy, is the very start of how and why it was created.

The vincian (aka toothpaste) flag as we know it today was based heavily upon a blue/green gay mlm flag (aka the listerine flag) that was created back in June of 2017. It was designed by Mod Hermy from the pride-color-schemes blog on Tumblr, as well as an anonymous requester, who asked for "blues and purples, but it looked too much like the butch lesbian flag so Hermy suggested using greens instead" in a way that was parallel to the lipstick lesbian flag.

Why is this a problem? Because it has no meaning. Absolutely no meaning, besides purposefully copying what was known at the time as the lesbian flag. Meaning in flags is not just important, but vital, as the flag is a symbol that represents the entirety of the community. A flag without meaning implies a community without history to draw meaning from. This is simply an awful representation of the gay mlm community, which are known to have rich history, dating all the way back to ancient Greek myths, and significantly further back as well. The gay mlm community is rich with history and significance, and any decent flag would represent that.

It also falls into the stereotype of "boy = blue" and "girl = pink", and on top of that, the creator of the flag is a supporter of "bi lesbians", which is an idea that is directly harmful to lesbians and bi sapphics alike, which is covered in further detail in this carrd.

There are screenshots for evidence of these claims below; take note of the dates, as they will be important later on (links will be in the sources page near the end of the carrd). 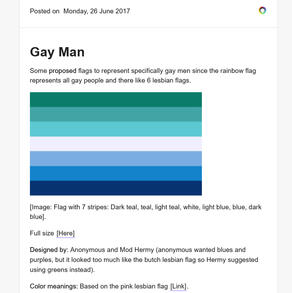 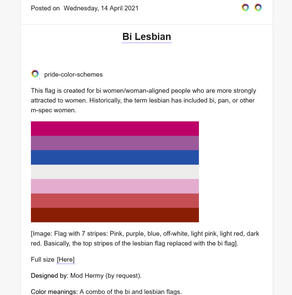 From the 2017 gay man flag, was created the vincian flag that is more commonly used today, which was originally posted in 2020. Its creation was in response to common criticism of the gay man flag from 2017 (ie, meaningless stripes, blue = boys, etc) but it missed a vital point that will be explored later on.

This flag is very similar to the 2017 version of the flag, in that it features green at the top, and blue at the bottom, put into a gradient with white in the center. This time, however, the flag was given meaning. Their meanings are a nod to the Gilbert Baker rainbow flag, which was the first gay man flag, and refers to trans, nonbinary, and gnc gay men, as well as making the green represent nature (as gay men are often seen as "unnatural" by heteronormative society) and the blue to indigo at the bottom representing variety in gender expression.

The important problem with this flag is not only that it's merely an adaptation of the 2017 flag, with the same/similar colors being featured in the exact same placements, but also that its structure is still the exact same as the iconic and symbolic flag structure associated with lesbians.

(screenshot for evidence below; link will be in sources page later in carrd) 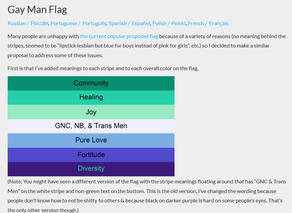 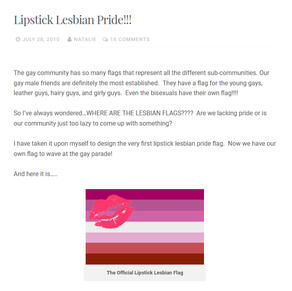 To continue from here, let's take a trip back to July of 2010; the year when the lipstick lesbian flag was created. The flag was created by a biphobic, racist, butchphobic transphobe; not a good look, which is why the flag clearly does not represent the lesbian community today. However, for the purpose of context (which matters a lot!), this was the flag that at the time represented the lesbian community, before it was renounced and replaced by the Emily Gwen sunset flag.

Similarly to the 2017 gay man flag, this flag has no meaning to any of its stripes, buys into the whole "pink for girls!" stereotype, and is a soulless copy of another flag; the cougar flag. 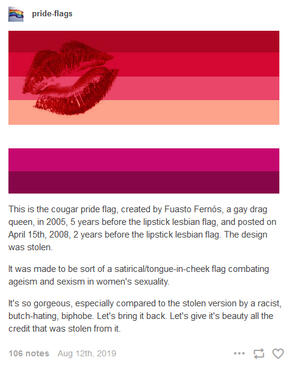 From the singular departure from the cougar flag, comes the iconic structure that is unique to the lesbian community, and is one of the only symbols unique to the lesbian community to this day. That structure is a 7 stripe, symmetrical gradient from one color at the top to another color at the bottom, featuring a singular white stripe in the center.

This is why it is so problematic that the vincian flag copies this flag structure. It was one of the only symbols unique to lesbians, and matter of fact, it's important that it's unique to lesbians, due to the variations of the lesbian flag that different lesbians may choose from. 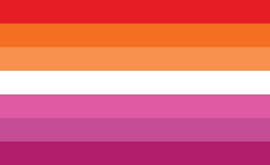 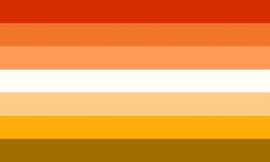 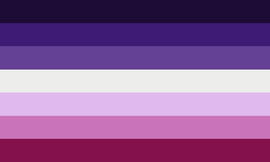 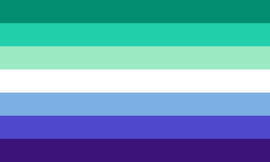 There are a variety! So many wonderful people have taken the time to make wonderful flags for the gay man community, as well as coin wonderful terms to describe said community.

A very common one is the Cinthean flag, which is derived from the ancient greek myth surrounding Apollo and the Hyacinth flower; a symbol of Apollo's deceased lover and ethereal hero, Hyacinthus. Its creation was through color selecting hyacinth flowers, and later editing the colors to form a more cohesive flag. It also creates its own unique flag structure, featuring a gradient from dark at the top to white at the bottom through 6 stripes, featuring multiple colors. 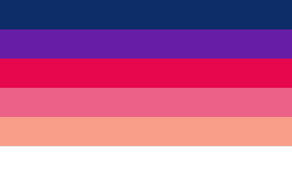 There's also, as mentioned previously, the Gilbert Baker flag. It's a very important flag to LGBTQA+ history, featuring the rainbow as a symbol for the first time, but was initially created specifically for gay men. It's rich with history, meaning, and a strong sense of community. It's understandable why many prefer not to use it, due to its frequent association with the entire community, but it's also an excellent symbol to use for those who find safety and solidarity in it. 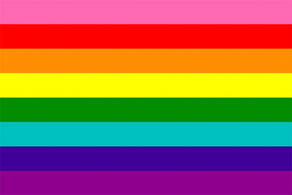 I promised a sources page, didn't I?

Thank you for listening to me rant! I hope you learned something from this, and maybe inspired you to change your mind; if not, oh well. I've said what I have to say, and if you learned nothing from all this information, then that's not my problem; unless you make it one, anyways.

If you have any genuine, not hostile questions, my twitter is @strwbryfemme, and my dms are open (I am not obligated to respond however if I lack the energy to have the conversation, or if your questions are sarcastic or hostile in nature).

Flags are important, as they represent an entire community, full of diverse people with even more diverse experiences. Even if you think that flag discourse is stupid or irrelevant, just remind yourself that these symbols represent your entire community, and don't just exist for aesthetics and fun.